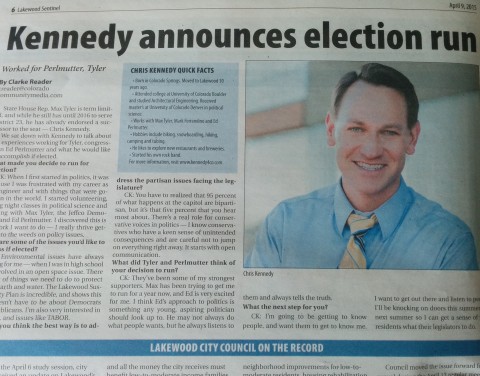 State House Rep. Max Tyler is term limited, and while he still has until 2016 to serve district 23, he has already endorsed a successor to the seat — Chris Kennedy.

We sat down with Kennedy to talk about his experiences working for Tyler, congressman Ed Perlmutter and what he would like to accomplish if elected.

Chris Kennedy, who knows all things Jeffco, has filed to run for the House seat now held by a fellow Democrat, Rep. Max Tyler.

Kennedy has worked at the state Capitol, served as Democratic chairman for Jefferson County and last year ran U.S. Rep. Ed Perlmutter’s successful re-election campaign (no offense to Kennedy but at this point Perlmutter is so popular in the 7th Congressional District the campaign practically runs itself).

“I am incredibly proud of the work I did to support legislators like Max Tyler and Ed Perlmutter who fight every day to grow the middle class, invest in our public education system, expand our renewable energy economy, and ensure equal rights and opportunities for all,” Kennedy said in his announcement.

Both Kennedy and Tyler live in Lakewood.

At the Capitol, Kennedy worked for Tyler in 2010, Reps. Millie Hamner and Jeanne Labuda in 2011, Tyler and Rep. Matt Jones in 2012, and former Speaker Mark Ferrandino.

Read the full article at DenverPost.com.