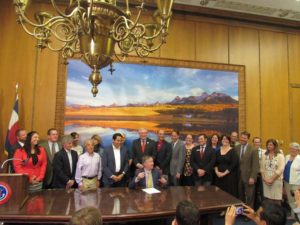 Just before Governor John Hickenlooper signed into law one of the most talked about bills of the 2017 legislative session, Senator John Kefalas, (D-Fort Collins) joked about the ups and downs of getting Senate Bill 17-040, known as Public Access to Government Files, through both chambers of the General Assembly…

Although supporters say there is still a long way to go with Colorado’s open records laws, the bill makes it easier for those seeking access to spreadsheets and other manipulatable data to obtain that data in its original format…

“The goal was to get it out of the Senate in a reasonable form,” Kefalas said. “They would have a lot of leverage in the House to take out the stuff that didn’t need to be in there and to add provisions that would strengthen the bill.”

That wasn’t quite as easy as first thought it would be, however. The bill’s House sponsor, Dan Pabon, (D- Denver) enlisted the help of freshman legislators Chris Kennedy, (D-Jefferson County) and Mike Weissman, (D-Arapahoe County) to strike a balance that would make the most stakeholders happy – or at least get them moving in the same direction.

Kennedy said he heard it the first time in the House Finance Committee, and it was clear there were a lot of issues that were going to make it hard to get it past his colleagues, so he asked Pabon what he could do to help.

Read the full story at CompleteColorado.com.

Read some great background from attorney Steve Zanzberg in the Fort Collins Coloradoan.