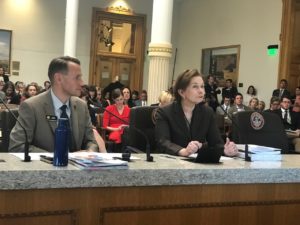 There’s a reason health care policy is a hot topic right now, and it’s not that “Obamacare is exploding.”

Health care costs have been growing faster than inflation for as long as I can remember. When I was working at my engineering firm in the mid-2000s, I remember the broker coming by every year to tell us how much our premiums would be going up. After the passage of the Affordable Care Act (a.k.a. Obamacare), premiums continued to rise, although not as quickly as before. Millions more people had coverage, which insurance companies could no longer deny to people with preexisting conditions.

But the fact remains that premiums are rising too quickly, and every voter I met last year knows it. That’s a big part of why I requested to serve on the Health, Insurance, and Environment Committee this year.

I started the legislative session hoping to identify some concrete steps we could take to address the growing cost of health care, but as I started to dig, I discovered how little we actually know about how our health care dollars are being spent. This is especially true with hospital care, which makes up 37 percent of our health care spending in Colorado.

We’re looking at several pieces of legislation this year to address concerns with pharmaceutical costs, insurance company practices, and the new free-standing emergency departments springing up all over the metro area. But my highest priority this session is getting to the bottom of the cost increases for hospital care.

My bill, House Bill 1236, will require hospitals to annually submit their cost reports and audited financial statements to the Department of Health Care Policy and Financing (HCPF, often pronounced “hick-puff”). HCPF will then produce an annual report breaking down spending on inpatient and outpatient care, personnel and administrative costs, capital construction and equipment expenditures, and uncompensated care (including charity care and bad debt) so that policymakers and citizens have the information they need to understand the cost drivers in our hospital system.

It’s also not just about premiums. State spending on Medicaid has been growing, too. Part of this growth comes from increased enrollment and utilization, but much of it comes from the same inflationary pressures impacting our premiums.

Lieutenant Governor Donna Lynne testified in support of my bill in committee, saying, “This bill is important. It provides the basic financial information in the interest of providing appropriate oversight for such a large portion of taxpayer dollars. Hospitals represent 32 percent of all state Medicaid expenditures – the single largest portion of the program with the single largest budget in the state. These are public dollars and the public should know where and how they are used.”

The bill passed the House with bipartisan support and will soon go to the Senate where it also has bipartisan sponsorship. Watch my speech on the House floor here.

Increasing transparency is only a first step, but I’m hopeful we can identify some of the major cost drivers, partner with hospitals on future legislation, and pass the savings along to the people of Colorado.